RSS feed for this section
This category contains 35 posts

Aaron Lloyd and David Tong of Minter Ellison Rudd Watts yesterday obtained a conviction on behalf of the Auckland branch of the SPCA as part of the firm’s commitment to pro bono work. The District Court at Manukau convicted Alison Freemantle-Pilkington, 57, of Papakura for seriously neglecting five horses in her care. Judge Moses ordered her to complete 220 hours of community work, ordered her to pay $4,526.71 in costs, and disqualified her from owning horses for five years.

Ms Freemantle-Pilkington owned a number of horses, which she kept at a property in Karaka. In July 2010, the Auckland SPCA received a complaint from one of her neighbours and so inspected her horses. The inspector found that five of her horses were malnourished and instructed her to feed them. When he returned, he found that she had not adequately done so and that the horses’ condition had worsened significantly.

Via Scoop.  Also in the Herald.

I don’t normally agree with PETA‘s tactics. Sex with vegetables, nude women against fur, etc. They’ve really outdone themselves recently with this ad which manages to make light of domestic abuse and (I think?) drug addiction in the name of promoting veganism.

But I think they’ve nailed it in one particular instance. Commissioning splatter-gore purveyors, Troma Films, they’ve made the clip below, highlighting the horrors of factory farming.

WARNING: It’s pretty gruesome but that’s the reality for billions of intensively-farmed animals around the world every day. What do you think?

With the SALDF Otago group. I'm in the middle with Sue Kedgley MP (left) and Danielle Duffield of SALDF.

Last month, I spent a few days in Dunedin. I was there to give a public lecture at the Otago University Law School: Towards Rights of Nature: The extension of legal personality to non-human animals.

I had the privilege of again speaking alongside Sue Kedgley MP of the Green Party of Aotearoa New Zealand, who has been the sole voice in Parliament for the interests of non-human animals for over a decade. Sue’s final Parliamentary term will end on the 26th of November when she takes a well-earned break from parliamentary politics. There was a strong turnout with about 80 people staying well into the evening to ask questions of us.

My talk centred on the extension of legal recognition to animals in philosophical discourse and in other jurisdictions. After a review of the historical evolution of animal welfare laws, the discussion turned to the treatment of animals as property and its attendant perverse consequences. This lay the ground for the central contention of the lecture which was to look at recognising the worth of non-human nature not simply for its utility to humans but for the intrinsic worth of other living beings. My starting point was Professor Christopher D Stone’s seminal article, ‘Should Trees Have Standing?’ ((1972) 45 Southern California Law Review 450) in which he makes the – in my view very compelling – point that we accord legal personality to corporations and even to ships (when a marine vessel is seized at port for non-payment of excises, duties, etc. it is said to be ‘arrested’) and yet whales, dolphins, cows, pigs – in fact, anything that is not human – are treated as a species of property.

In the 2008 Constitution of Ecuador and the 2011 Bolivian ‘Law of Mother Earth’, this recognition of the intrinsic worth of non-human nature has been officially recognised; extending even to unique ecosystems and landscapes. In practical effect, this overcomes the legal hurdle of standing. That is, in every jurisdiction but these Latin American countries, one has to demonstrate that they have a proprietary interest in the animal or ‘natural resource’ at issue or that their right to property or non-interference with enjoyment of property will be unduly impinged upon. If this cannot be demonstrated to the satisfaction of the Court, the claimant is said to lack locus standi. A recognition of legal personality overcomes this limitation and allows any (human) person to advocate on behalf of an animal or other part of the environment, or seek review of an administrative decision concerning them. There has been an advocate for animals employed by the state government of Zurich in Switzerland for years. Although it must be said the laws there are still cast in the welfare paradigm rather than extending ‘rights’ to animals, it shows that the idea of an advocate for animals is not without precedent. Indeed, the enforcement of animal welfare law in New Zealand would be substantially improved if the state funded prosecutors rather than leaving this important duty predominantly to a charitable organisation funded almost entirely by public donations.

You may note my hesitation in employing the term ‘rights’ when applied to animals. This is because I don’t think the term is particularly useful given its liberal-democratic connotations. It all too easily invites reductio ad absurdum ripostes to straw man arguments built around dogs having the right vote or disposition of the matrimonial property of horses. Of course, the extension of legal personality contends no such thing. Or, if the vocabulary of rights must be employed, it aligns with Professor Gary Francione’s argument that the only right any animal needs is the right not to be treated as property. But while we’re on the topic of satire, I’m reminded of a piece intended as a rhetorical knock-out blow to Mary Wollstonecraft’s A Vindication of the Rights of Woman (1792). Entitled, A Vindication of the Rights of Brutes, it was published anonymously (but later revealed to be the work of prominent Cambridge classicist, Thomas Taylor) shortly after the publication of Wollstonecraft’s manifesto and advanced the thesis that all the arguments made for the equality of women with men could equally be applied to the relationship between humans and animals. Two hundred and nineteen years ago, this was considered to be a damning comparison but in these more enlightened times it makes my point exactly!

The next day I held a seminar with a group predominantly comprised of law students to discuss the animal welfare codes in New Zealand. Welfare Codes are the regulations that allow industrial producers to exploit animals in ways that would otherwise be considered ‘ill-treatment’ under the Animal Welfare Act 1999. But more on this in a future post.

Otago certainly has a picturesque campus and I really appreciated the contrast with the University of Auckland campus which is bisected by major arterial roads and is bounded by the CBD. I was particularly impressed with the campus spirit and the sense of collegiality about the place. On more than one occasion, as I walked around the campus, I was stopped by people who had been to the lecture and were eager to talk further about the issues raised which was a really inspiring experience.

I was amazed at the strength of the Student Animal Legal Defence Fund (SALDF) group at Otago which generously funded my trip; they have really achieved something impressive. The SALDF is an initiative of the Animal Legal Defence Fund, a large public interest law firm in the United States. The Otago group is the first SALDF chapter in the southern hemisphere and is an excellent model for other chapters of the group in other New Zealand universities. All the more remarkable is the fact that unlike the University of Auckland which was fortunate enough to have Peter Sankoff teaching a course in Animal Law, Otago has never had any such programme. And yet, last year they held an animal law week in which students presented seminars on various animal legal issues. Incredible.

Special thanks to Danielle Duffield for being a great host, organising the whole event and making things very easy for me, I just had to turn up and talk. Thanks also to Kari Petro-Schmidt and Mahoney Turnbull for their contributions.

5 Quick Thoughts on Citizens and Consumers

This post germinated in my mind as I walked home from SoLVe’s screening of Food Inc last night. The SoLVe team did a great job.  After the movie, Vernon Tava (Co-Editor of The Solution and past SoLVe President) facilitated a discussion between the 50-70 students present, with two lecturers – Peter Sankoff and Mohsen Al-Attar – present as expert commentators.

One of the most resounding and repeated themes was: What do we do now?  Naturally, I think we should go vegan – that’s a given.  But more fundamentally we should think more about what we eat – and what we consume in other ways.  When we come to food, we are all consumers.  To claim that is a tautology: We consume food.

Mohsen presented a juxtaposition between the self as consumer and the self as citizen.  I want to make five simple observations. END_OF_DOCUMENT_TOKEN_TO_BE_REPLACED

I bet it’s nice to be right every now and then. Good for the self-esteem, at any rate. However I’m not sure where you stand when publicly falsifying your own previous positions. There is a certain degree of comfort in knowing that if the new me wasn’t right, then sure enough the old one was.

This is where British environmentalist George Monbiot now finds himself. Despite previously proclaiming that the ‘only’ ethical stance in the face of coming food and climate crises was veganism, he has recently published an article dramatically titled ‘I was wrong about veganism. Let them eat meat – but farm it properly’. END_OF_DOCUMENT_TOKEN_TO_BE_REPLACED 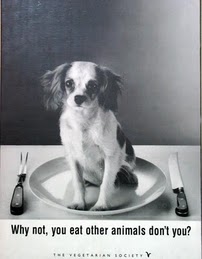 UPDATE: An interview with Laraque explaining how he became vegan.

Great news from Canada, where former professional hockey player Georges Laraque has become perhaps Canada’s first vegan politician, joining the Green Party, which over the past five years has been growing in size and stature.   Laraque makes no bones about what his priorities are: “promoting the link between physical health and the environment”, which sounds a lot like educating people about veganism to me.

It’s refreshing to see vegans coming forth in all areas of public life.  Again, while many refuse to admit it, veganism is still regarded by many in mainstream society with confusion, derision and fear.   Electing those with vegan views to public office is just one way of getting over the many stereotypes existing about this way of life. And as I’ve said in many posts, more vegans is the most direct way to changing society’s view about animals.

Amazing that – and please correct me if I’m wrong – we are still waiting for New Zealand’s first “out” vegan politician.  It’s no small feat, believe me, and the person who achieves that designation will face many of the same prejudices and stereotypes as our first gay politician, our first transgender politician and others of similar disadvantaged groups.  Take it from the first vegan member to ever grace Auckland’s law faculty.  It takes time to break down doors of discrimination and get people to see that vegans are “people too”; just people with a different view of the importance of avoiding the consumption of animals and animal products.

Looking back over the month that was…