Just a quick note on the Animal Justice Fund, administered by SAFE, funded from Jan Cameron’s (founder of the hugely-successful outdoor equipment company, Kathmandu) fortune which allocates $2 million for whistleblowers. Between $5 000 and $30 000 can be awarded in each instance that leads to a successful prosecution or ‘significant animal welfare outcome.’

To date, at least six workers have ‘dobbed in’ bosses for animal cruelty. But none want to accept the reward.

All were for dairy farms and piggeries. None of the workers were still employed by the farms they were laying complaints against, so the cases and information are considered ‘historical’ and hence a low priority for investigation. Four of these cases were referred to MAF. According to SAFE’s Hans Kriek:

Paddocks were in bad shape, there were stones and lame cows. There were high mortality rates amongst calves. Dying animals were being left to rot in paddocks. With the pig farms we had the usual complaints … that the conditions were terrible and enclosures weren’t cleaned out and the animals were standing a foot deep in their own muck.

Yet, no breaches of the relevant welfare codes were found in any case. END_OF_DOCUMENT_TOKEN_TO_BE_REPLACED 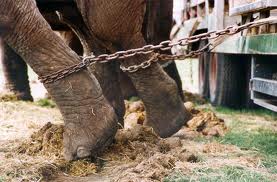 The Bolivian law, which states that the use of all animals in circuses ‘constitutes an act of cruelty’ was enacted on 1 July 2009, with operators given a year to comply.

The bill took two years to pass through both chambers of the Plurinational Assembly, meeting stiff opposition from the eastern states of Bolivia where there was concern that the law would be expanded to include bullfighting, which is popular in rural villages. Bullfighting remains legal in Bolivia.

The legislature were eventually won over by a screening of videos shot by undercover circus infiltrators in Bolivia, Peru, Ecuador and Colombia co-ordinated and funded by Animal Defence International (ADI), a London-based NGO which found that ill-treatment and violence against animals in circuses is commonplace.

END_OF_DOCUMENT_TOKEN_TO_BE_REPLACED

Animal Welfare on Farms: A lower standard for agricultural animals

A healthy flock of sheep

A report in the Dominion Post this week about a particularly nasty case of criminal neglect of sheep in the Manawatu highlights much of what is wrong with the enforcement and prosecution of animal welfare offences on farms in New Zealand:

75 sheep were found dead and another 25 had to be put down [immediately] because of alleged ill-treatment. SPCA officials raided the farm in August after being tipped off about the sheep. The 66-hectare farm is now under strict monitoring by vets and four SPCA inspectors. It is still being run by the farmer and has several hundred sheep.

Although full details have not yet been divulged by prosecutors, pending the laying of charges, it appears that the sheep were emaciated from starvation and severe neglect. The file is about to be sent to Crown Law for prosecution.

For reasons that will become clear, it is important to note that this was a raid carried out by the SPCA (Society for the Prevention of Cruelty to Animals). Under the Animal Welfare Act 1999, three bodies are statutorily-empowered to investigate and prosecute animal welfare cases; the Police, the Ministry of Agriculture and Forestry (MAF) and the SPCA. Only the Police and MAF are fully state-funded, the SPCA relies for 98% of its income on private donations. END_OF_DOCUMENT_TOKEN_TO_BE_REPLACED

Against the Proposed New Elephant Enclosure at Auckland Zoo

Plans were approved in August this year to expand the elephant enclosure at Auckland Zoo to six times its current area.  The importation of another 9 elephants to join the current sole occupant, Burma, would make this the only elephant herd in Australasia. The planned extension into Western Springs Park is estimated (by many accounts, unrealistically) to cost $13 million and the zoo plans to expand into 22000 square metres of the park.

Two main arguments have been made for this. First, that Burma is in need of companions as elephants are intelligent, empathic, social animals and she has only recently lost her companion, Kashin. Second, that the herd will be valuable for conservation. Given a choice between sending one animal to a reserve overseas or committing to the hugely-expensive upkeep of ten elephants, the City has chosen the latter.

This goes against international trends to close elephant enclosures. As pointed out in SAFE’s excellent submission to the Auckland City Council Combined Committees, enclosures closed this decade include London (2002), San Francisco (2005), Detroit (2005), Lincoln Park, Chicago (2005), Alaska (2007), and Philadelphia (2009). A significant number of zoos have also committed to gradually phasing out their herds by not replacing elephants.

END_OF_DOCUMENT_TOKEN_TO_BE_REPLACED

Cultural Significance v Animal Rights: The Constitutional Challenge to the Ban on Bullfighting in Catalonia 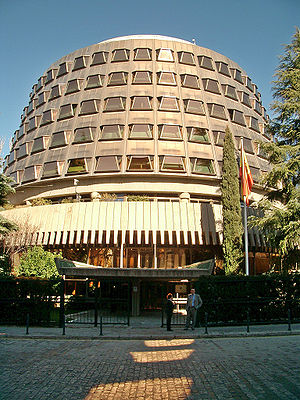 Bullfighting was banned in the autonomous Spanish region of Catalonia on 28 July this year, with the ban coming into full effect in 2012.

Now, three months to the day later, the Spanish Constitutional Court (housed in a rather Beehive-esque building) has accepted an appeal lodged by the Partido Popular (People’s Party, PP) challenging Catalonia’s ban on cultural, economic and administrative grounds. The PP is a conservative, nationalist party known for such other legislative projects as restricting immigration to Catalonia and deporting immigrants who have not learnt the Catalan language to proposed minimum standards.

If the appeal is successful, the Court may overturn the regional ban (I have written in detail on this ban here). However, the Court can take months or years to deliver a judgment.
The central constitutional provision is article 149, which provides that the State has exclusive jurisdiction over conditions governing ‘the equality of all Spanish in exercising their constitutional rights.’ This is advanced as the basis for the following three grounds of appeal: END_OF_DOCUMENT_TOKEN_TO_BE_REPLACED

Sow Crates Are To Be Phased-Out: But ‘farrowing’ crates remain

The Minister for Agriculture, David Carter, has confirmed that the new Pig Welfare 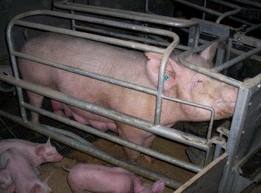 Code will phase out the use of sow crates in New Zealand within the next five years. The ban will come into full effect in early 2016.

Many readers will remember that SoLVe (the University of Auckland Law Faculty student group that was the genesis of this blog) hosted a seminar given by Peter Sankoff (to a packed lecture theatre) on this issue on May 27th 2009.

A ban on sow stalls included in the draft welfare code was leaked to SAFE (Save Animals From Exploitation) in February this year.

The draft code, developed by the National Animal Welfare Advisory Committee (NAWAC), was to be released for public notification in December 2009 but was delayed following legal threats from the New Zealand Pork Industry Board. NAWAC preferred a ban by December 2017, a full two years later than the deadline that has been decided.

Sow stalls have already been banned in the United Kingdom and Sweden and will be soon phased out in Finland, Switzerland, the Netherlands and Denmark. END_OF_DOCUMENT_TOKEN_TO_BE_REPLACED

In an alarming development for anyone concerned about civil liberties in New Zealand, the Search and Surveillance Bill, currently before Parliament, will extend powers previously available only to Police to any state agencies with enforcement powers, of which there are 70. This includes, for instance, Work and Income New Zealand and the Pork Industry Board.

I’ve posted recently about the nefarious activities of the Pork Industry Board here in attempting to avoid their obligations under the Official Information Act 1982.

There have been widespread protests against the bill which strips away civil rights hard won over centuries in one fell swoop: END_OF_DOCUMENT_TOKEN_TO_BE_REPLACED

Pig Farmers: The NZ Pork Industry Board Is Keeping Your Secrets Safe Tonight 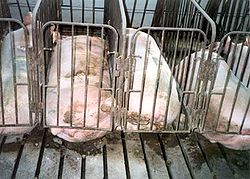 And these are the crates they'll let us see...

The nationwide furore over the conditions in which pigs are intensively farmed has finally prompted voluntary audits of conditions in piggeries around Aotearoa New Zealand.

Today, a leaked email was released in which the New Zealand Pork Industry Board, a statutorily-created entity, is shown attempting to develop a legal strategy to avoid the results of those audits being made public. To quote the Dominion Post:

A suggested alternative would mean only the farmer and auditor would hold “completed documentation”, with the board notified of pass, fail, or “pending corrective actions (unspecified).”

Board chief executive Sam McIvor said its legal advice suggested the audit report would belong to the farmer, meaning it was personal information.

Some very serious questions need to be asked of a statutory body – albeit one that is mostly funded by farmers – that considers protecting piggery owners from “embarrassment” justification for its connivance to avoid a general obligation under the Official Information Act 1982 (OIA) to make information ‘held’ by them available to the public.

In any event, this tactic will simply not work. The Pork Industry Board is listed in the schedule to the OIA and section 2(5) of the Act is clear that “official information” includes:

He said the board wanted to be accountable to pork-buying customers, but most customers did not care about farm conditions, just whether they had passed a minimum standard. “There does have to be some trust and the customers need to be able to trust us that we have the processes in place.”

Indeed. The kind of trust that holds so long as you don’t ask any embarrassing questions.

Leaving aside this deft identification of the Board’s constituency as being only “pork-buying customers”,  it is statements such as these that lay bare the true issue: It is not privacy, it is certainly not animal health, it is secrecy. Secrecy that allows an industry with some  demonstrably cruel operators to continue to avoid public scrutiny of their profiting from the suffering of animals.

A report on the current review is due next week. We’ll keep you updated.

Spain’s Catalonian regional parliament has banned bullfighting in a vote of 68 – 55 with nine abstaining.

It is the second Spanish region after the Canary Islands (which banned bullfighting in 1991) to outlaw the practice and the first on the mainland.

Bullfighting is a brutal spectacle  in which the torture and death of the bull is the end of a life-long process of abuse and mistreatment (I’ve written on this in more detail here) and this is a significant victory for a coalition of Catalonian animal rights groups called “Prou!” meaning “Enough!”  They initated the vote by submitting a 180 000-signature petition to the parliament, calling for a ban.

The vote was not a cut-and-dry animal welfare issue as the rejection of this emblematically Spanish tradition is also widely interpreted as animated by separatist sentiment. Of Spain’s semi-autonomous regions, Catalunya has the greatest degree of autonomy along with the Basque region. It has even been suggested that the vote was calculated in last-minute lobbying as retaliation for a recent decision from Spain’s Constitutional court which has curtailed some of the proudly-independent region’s autonomy in law-making.

This is an exciting advance made against one of the most tradition-bound forms of animal suffering. The commercial significance of the ‘sport’ falls far short of that in the Spanish capital of Madrid and Andalucia to the South, when the law comes into effect in 2012 it will close Barcelona’s last remaining bullring, La Monumental. This may limit the spread of the ban to the other regions.

But there is still work to do. Activists have now set their sights on a ban on the Correbous, an annual festival in the region in which flaming torches and even fireworks are fastened to the bulls’ horns and they are set loose, frightened, disoriented and often suffering burns, to run around  an enclosure for the amusement of onlookers.