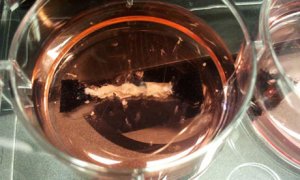 In a move that may overcome the cruelty problem of raising and killing animals for meat, Dr Mark Post of Maastricht University and Eindhoven University of Technology in the Netherlands has pioneered the technique of growing meat independently of an animal by the cultivation of stem cells.

The pieces of muscle are made by extracting stem cells from cow muscle tissue and growing them in containers in a laboratory. The cells are grown in a culture medium containing foetal calf serum, which contains the nutrients the cells need to grow. The nutrients in the meat itself need to come from another source, Post will use algae to produce the amino acids, sugars and fats necessary to produce a nutritious flesh. The strips of muscle are cultivated between pieces of Velcro and flex and contract as they develop. To improve the texture of the tissue and make more protein in the cells the samples are periodically shocked with an electric current.

The problems for which this is a solution are summed up rather concisely in this abstract of a paper called ‘Advances, Challenges and Prospects for Cultivation of Tissue-Engineered Meat’ that Dr Post presented in February this year:

Traditional meat production through livestock is rapidly reaching its limits. Worldwide, meat consumption is projected to double in the coming 40 years (source WHO) and already we are using more than 50% – 70% of all the agricultural land for meat production. It has also become clear that livestock contributes appreciably to the emission of greenhouse gases such as methane and CO2. Last, the public objection against cruelty to animals will eventually favor a market for cruelty free meat …

From all livestock, cows and pigs are the least efficient meat producers with a bioconversion rate of 15%. Through breeding and feeding, the bioconversion rate has reached its upper limit. This inefficiency provides us with a margin to improve meat production provided we move beyond the traditional boundaries of livestock.

This has been an expensive process, funded by an anonymous donor and reported by The Guardian as costing £200,000 (NZ$383,274 at the time of writing). It’s also worth looking at the Guardian link for a neat graphic of the production process.

This raises some interesting questions for vegans, vegetarians and animal rightists: Would we eat it? Is it ethical? Is it a viable solution to the environmental crisis engendered in large-scale industrial farming without requiring people to stop eating flesh?

The initial ethical concern would seem to be around the use of stem cells. But unlike the use of human stem cell therapies and experimentation which require the creation and destruction of human embryos, this process begins with cells taken from a cow or pig. Because the initial culture is on such a small scale – just a few cells are all that is needed – the animal needn’t necessarily be killed or even harmed by any more than a small biopsy cut.

The environmental upside is considerable. Cattle and pigs worldwide contribute as much as 18% of Green House Gases. ‘Livestock’ is also responsible for the bulk of the methane and nitrous oxide emissions to the atmosphere and these two gases are many times more potent than the benchmark CO2 (25 and 298 times respectively). Biodiversity loss and extinctions are largely a function of conversion of land to the purpose of animal agriculture and the monocultural cultivation of crops which are perfectly viable for human consumption to feed those animals. Agricultural pasture makes up almost 40 percent of New Zealand’s total land area and occupies about four times the area of planted forestry and all other modified types of land cover combined; the odd terraced appearance of many of our rural hillsides is a result of the ongoing erosion of this fragile, deforested land, cleared for grazing pasture. It is certainly not helped by large, cloven-hooved animals clambering up steep hillsides. Another source of concern is the degradation of our waterways from agricultural fertilisers, stock manure and urine, and the effluent flushed into rivers and streams by processing plants.

Post has also said that he’d only chosen beef and pork to grow because they were the least efficient in terms of energy conversion. He also said that they could grow any meat that they could take a small sample of and actually suggested Panda meat as an example. But imagine if ‘gourmands’ who insist on eating endangered animals such as whales, patagonian toothfish, sea turtles, whatever could do so without the animal having to be hunted to extinction.

However, we still don’t know how energy-intensive the lab-based production technique will be on a commercial scale, nor what are the waste products and how they will be disposed of.

Not all the costs implicit in meat consumption will be reduced. Something I’ve noticed in my years of eating vegan is how little time I now spend by the refrigerators at the supermarket. This meat will still need to be refrigerated. In fact, 65% of the energy consumed by supermarkets in New Zealand is for refrigeration, almost all of that is for the refrigerated storage of meat and dairy products.

Having said all this, I still wouldn’t feel comfortable eating this manufactured meat. After all, we don’t actually need it to be healthy and meat still contains cholestorol and suspected carcinogens that have proven negative consequences for human health. I’m genuinely interested in your thoughts, please feel free to make a comment. Would you eat it?