Animal Welfare on Farms: A lower standard for agricultural animals 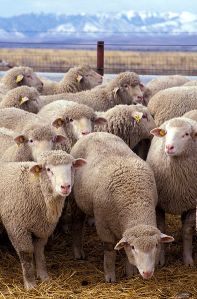 A healthy flock of sheep

A report in the Dominion Post this week about a particularly nasty case of criminal neglect of sheep in the Manawatu highlights much of what is wrong with the enforcement and prosecution of animal welfare offences on farms in New Zealand:

75 sheep were found dead and another 25 had to be put down [immediately] because of alleged ill-treatment. SPCA officials raided the farm in August after being tipped off about the sheep. The 66-hectare farm is now under strict monitoring by vets and four SPCA inspectors. It is still being run by the farmer and has several hundred sheep.

Although full details have not yet been divulged by prosecutors, pending the laying of charges, it appears that the sheep were emaciated from starvation and severe neglect. The file is about to be sent to Crown Law for prosecution.

For reasons that will become clear, it is important to note that this was a raid carried out by the SPCA (Society for the Prevention of Cruelty to Animals). Under the Animal Welfare Act 1999, three bodies are statutorily-empowered to investigate and prosecute animal welfare cases; the Police, the Ministry of Agriculture and Forestry (MAF) and the SPCA. Only the Police and MAF are fully state-funded, the SPCA relies for 98% of its income on private donations.

The Police have little interest in such matters and rarely bring charges and prosecutions. Given the limited availability of time and resources, police officers will, unsurprisingly, prioritise the protection of human interests. It would seem then, that this is very much within the purview of MAF. The Ministry is ultimately responsible for the administration of the AWA in New Zealand and together with the portfolio of Biosecurity, the Minister is in charge of overseeing the welfare of the country’s roughly 370 000 pigs, 10 million cows, 40 million sheep, 90 million chickens and assorted other commercially-exploited animals. For this considerable task, MAF has allocated 5 inspectors to cover the entire country. Yes, 5.

Even these 5 inspectors do not appear to be particularly interested in pursuing prosecutions. I’ve posted about this before here. I noted that:

[O]ut of 1439 investigations in two years, only two resulted in prosecutions. This is a rate of less than 0.4% … MAF officials say that prosecutions ‘are a last resort.  The department generally focuses on educating and working with farmers.’

As a representative example of just how lenient MAF is in dealing with farmers. A farmer was visited in June 2007 after a complaint was made. Dead and starving cattle littered the farm. Formal notices were issued throughout July and August. More dead and starving cattle were found. In September of that year, MAF obtained a temporary enforcement order that directed the farmer to comply with the instructions given by MAF investigators. Only when repeated orders were breached did a prosecution ensue. If this were a case of mistreatment of domestic animals, dogs or cats for instance, the animals would have been immediately confiscated and charges brought.

So this leaves the SPCA. A private organisation funded almost entirely by donations. The article also noted that:

The Manawatu case was revealed in the Wellington SPCA’s annual report. It also showed that the organisation took four prosecutions in the last financial year, had two pending and paid out $10,500 in “rewards”.

Six cases. Surely these can only be the worst of the worst? Such funding strictures will also ensure that prosecutions are only brought in truly egregious cases with a high certainty of conviction justifying the expense. The SPCA must be careful which cases it chooses to investigate and prosecute as the AWA is a piece of criminal legislation and the standard of proof is correspondingly high: beyond all reasonable doubt. What is more, judges tend to be reluctant to stigmatise people with a criminal charge for what is after all just an animal.

But the real question underlying all this is: why must an incident of this scale fall to a privately-funded body to be investigated? If the government were truly serious about improving animal welfare on farms in New Zealand, instead of simply raising the maximum penalties (which sounds good, achieves little and costs nothing), they could put some money toward more inspectors and prosecutions. Currently, MAF contributes about 2% of the RSPCA’s annual national expenditure, following on from a commitment made in June 2010 to contribute $1.2 million over four years to farm investigations. This is something but more is needed. It would not even be necessary to create a new prosecution apparatus. As in this case, prosecutions can be handed on to the Crown Law office.

As it is, there is a serious double standard regarding the difference in treatment of domestic and agricultural animals in New Zealand. There are two main reasons for this. Animal welfare codes  are designed to allow exploitation and cruelty that is not permissible under the AWA which provides for their creation (more on these in future posts). Perhaps just as importantly, as we have seen in the cases above, the enforcement apparatus is so minimal as to be invisible. This is one of the difficulties of having animal welfare administered by MAF, the same ministry that has as one of its primary objectives the promotion and development of the industry of agriculture and its exploitation of animals.

4 thoughts on “Animal Welfare on Farms: A lower standard for agricultural animals”