With much fanfare, the government launched an animal welfare amendment bill earlier this year.  You may remember our scepticism.  Now, with much less fanfare, Sue Kedgley MP’s clumsily-titled private members bill, the Animal Welfare Amendment (Treatment of Animals) Bill has been balloted to receive its first reading in September.

So, what does she hope to do? END_OF_DOCUMENT_TOKEN_TO_BE_REPLACED

In an alarming development for anyone concerned about civil liberties in New Zealand, the Search and Surveillance Bill, currently before Parliament, will extend powers previously available only to Police to any state agencies with enforcement powers, of which there are 70. This includes, for instance, Work and Income New Zealand and the Pork Industry Board.

I’ve posted recently about the nefarious activities of the Pork Industry Board here in attempting to avoid their obligations under the Official Information Act 1982.

There have been widespread protests against the bill which strips away civil rights hard won over centuries in one fell swoop: END_OF_DOCUMENT_TOKEN_TO_BE_REPLACED

Just got back from Dunedin, where last night I gave a guest lecture as part of Animal Law week, a production of the Student Animal Legal Defence Fund (SALDF) chapter recently established at the University of Otago – the first ever Chapter outside of North America.

It was a hell of an experience, and one I enjoyed immensely.   After years struggling to get a viable student group working at Auckland, it was refreshing to see a student-created group with so much focus and vigour – and so much concern for animal law issues.   In addition to my talk, the Otago group has set up a whole week of seminars, stalls and discussions, many of them student led and researched.   Quite a feat, especially when you consider that animal law has never been taught at Otago – and is not currently on the agenda.

The talk itself went well, and I received some wonderful feedback.   A packed house learned about the animal welfare construct and why it fails animals, and we continued talking afterwards as well.  I was pleased to hear that this SALDF chapter is planning to host further events through the year, and with the support of the Otago administration, an animal law course might not be far off. END_OF_DOCUMENT_TOKEN_TO_BE_REPLACED

A new book on animal law was recently published and launched in Australia. Animal Law in Australia and New Zealand, by Deborah Cao – with chapters by Katrina Sharman and Steven White – is the latest book on animal law to be published in this part of the world.  I haven’t yet had a comprehensive read, but the book seems to be a good treatment of the laws governing animals in this part of the world – a much needed reference work that will allow people to continue critiquing the status quo.

The book was launched by Michael Kirby during the Voiceless Animal Law Lecture Series, featuring Joyce Tischler, of the Animal Legal Defence Fund.  I was particularly struck by his remarks, a section of which I’ve reproduced below (full text available at the Sydney Morning Herald):

A year ago I launched a book that changed my life. It was Animal Law in Australasia. After reading it, I immediately ceased eating meat.

For more than a year, I have eaten neither flesh nor fowl. My diet is vegetarian, with a little fish. After nearly 70 years as a carnivore, this was a big change in my habits and eating pleasures. My partner, Johan van Vloten, told friends: ”It’s another fad. He’ll get over it.” But I have not and will not.

The book contained too much information. I could no longer pretend I did not know how sentient animals were slaughtered. No longer could I trick my mind into believing that meat and chicken pieces, so neatly wrapped in plastic or beautifully served on white plates, were the impersonal products of sterile, clean supermarkets. I was distressed at my earlier indifference and indirect participation in a huge industry of corporatised killing of sentient creatures…

Most people in Australia and New Zealand never think about these issues. Eating meat and poultry has been part of their lives for generations. They feel no guilt because they take no part in the slaughter. When they think about it (which is rarely), they assume the law lays down basic standards…

Animal welfare law has been introduced in a journey that commenced with protection for companion animals; spread to a prohibition on senseless cruelty in sporting, circus and entertainment animals; and more recently has extended to the treatment of farm, exported and wild animals, and those in corporations and laboratories subjected to testing for human protection…

A growing body of university students, most in law faculties, are electing to undertake courses in animal welfare law. Already, such courses are offered in six Australian law schools. More are on the horizon. What not so long ago was regarded as an exotic topic of limited interest is now a fast-growing curriculum subject with a real legal dimension.

Why has this happened? Why has it happened now? In part, it is because writers such as Singer rekindled the ideas of earlier thoughtful observers and planted them in the mind of contemporary Australasia. In part, this has happened because cruelty to animals happens in our midst and, as a community, we are responsible for it.

All good stuff.  Kirby has been a real leader in this area, constantly speaking his mind on behalf of animals, getting good press coverage on the issues, and reminding people that animal law is no fad; thinking people can be convinced about the dangers of allowing the existing status quo to go unrestrained.

I must confess that on a personal note, the first sentence made me blush, at least a little bit.  I created Animal Law in Australasia for two purposes: (1) to get people to think about their own actions; and (2) to get the ball rolling on more advanced critique of how animals are treated in Australasia.  Kirby’s speech told me that both objectives were in the process of being realized, and that’s enough to keep a smile on my face all day.

Next week, I’m attending Animal Law week at the University of Otago as a guest speaker.  The first ever New Zealand chapter of the Animal Legal Defence Fund has put together a wonderful program of events intended to bring “animal law” to the masses and show how interesting the subject really is – and how important the issues are.  Just goes to show what can be done once a spark is lit – and how momentum for change in the legal community continues to grow. 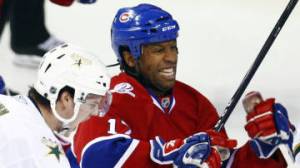 UPDATE: An interview with Laraque explaining how he became vegan.

Great news from Canada, where former professional hockey player Georges Laraque has become perhaps Canada’s first vegan politician, joining the Green Party, which over the past five years has been growing in size and stature.   Laraque makes no bones about what his priorities are: “promoting the link between physical health and the environment”, which sounds a lot like educating people about veganism to me.

It’s refreshing to see vegans coming forth in all areas of public life.  Again, while many refuse to admit it, veganism is still regarded by many in mainstream society with confusion, derision and fear.   Electing those with vegan views to public office is just one way of getting over the many stereotypes existing about this way of life. And as I’ve said in many posts, more vegans is the most direct way to changing society’s view about animals.

Amazing that – and please correct me if I’m wrong – we are still waiting for New Zealand’s first “out” vegan politician.  It’s no small feat, believe me, and the person who achieves that designation will face many of the same prejudices and stereotypes as our first gay politician, our first transgender politician and others of similar disadvantaged groups.  Take it from the first vegan member to ever grace Auckland’s law faculty.  It takes time to break down doors of discrimination and get people to see that vegans are “people too”; just people with a different view of the importance of avoiding the consumption of animals and animal products.