Blowing Off Some Steam about Wellsford and Politicians

There’s a lot to be angry about these days.  Ever since a couple of lunatics decided to commit the ‘Wellsford Massacre’, by emptying their shotguns into a shed full of puppies, the media has been alight with stories about animal welfare.  In one sense, that’s good.  We certainly need to be paying more attention to what is, sadly, a prevalent problem.  Nonetheless, there’s a lot to get angry about from the media coverage as well.  I’m not sure whether it’s the media, the killers up in Wellsford, some lady calling me a dick-head, or a combination of all these things, but I’m feeling pretty steamed.  Rather than attempt a coherent blog in this state, I’ll throw out a few points on the ‘things that are making me mad’, and hope it makes some degree of sense in the end.

Disclaimer
Before doing so, a disclaimer.  I worry some times that people read parts of my comments rather than the whole.  So let me state this loud and clear: I am not against punishing people who commit cruelty against animals.  Far from it.  I’ve done as much to try and get sentences fairly applied as anyone, and have written legal articles, drafted submissions to Parliament and worked with prosecutors to bolster sentences for animal abusers.  It is, to be sure, a component of what needs to happen in order to have a country that treats animals better than it currently does.  Nonetheless, as you’ll see from my comments below, I have serious reservations about the way this has suddenly become ‘the answer’ to our problems.

My Talk with Simon Bridges, MP
A few weeks before he introduced his new Bill to raise the maximum penalty for wilful ill-treatment to animals causing death from three to five years, Simon Bridges called me to see what I thought.  I told him I thought it would do absolutely nothing for animals, and might even set back the cause.  I think he was taken aback, as my position seemed both counter-intuitive and contrary to the ‘animal lover’ position.  So I explained.   The problem, as I see it, is not the maximum sentence for the single most serious crime relating to animals.   A three year maximum, believe it or not, is fairly high by New Zealand standards.  Sure, judges rarely impose the maximum, but that’s true for all crimes.  Nonetheless, the three year maximum is not out-of-whack with other jurisdictions, and gives plenty of room to get jail time for those who commit horrid acts. END_OF_DOCUMENT_TOKEN_TO_BE_REPLACED

A few more thoughts on the Wellsford Massacre…

As more details emerge from what happened in Wellsford two days ago, the whole picture gets a great deal grimmer.  In New Zealand terms, this was a huge story, splashed all over the front page of the Herald, and it has garnered considerable attention.  Sadly, it says a lot about our view towards animals, and highlights some of the weaknesses of the existing animal welfare system.  Incidentally, if you haven’t done so, it’s probably worth reading what I had to say on this yesterday, as I don’t plan on repeating any details of the case that I talked about then.  But here are six additional things to think about:

First, the horrors of the incident should not be underestimated.  When SPCA inspectors, who see plenty of awful things done to animals every day, are left speechless – it’s pretty bad news.  The perpetrator of the act deserves the condemnation he’s getting now, and hopefully the jail time he deserves.  Let’s be honest.  That’s one pretty sick guy. END_OF_DOCUMENT_TOKEN_TO_BE_REPLACED

Ummm… What’s There to Think About?

Depressing images from this morning’s New Zealand herald.  The lead story on the internet version of the paper is entitled ‘33 dogs massacred in ‘rifle-killing frenzy‘.

I’ll let you look over the depressing facts yourself.   I’m interested in the legal aspects of the case.  Consider the following facts set out in the Herald – keeping in mind that the Herald ‘facts’ are not necessarily actual ‘facts’:

Yesterday, holding back tears, [the owner] described the sounds of his dogs being shot – sounds that echoed off the quarry walls for 20 minutes.

“They were screaming, making sounds dogs just don’t make. When one was gone, the others knew they’d be next, but they had nowhere to go.”

In all, 23 pups and young dogs, which slept in the owner’s truck, were shot, as were a male and female dog living in a van wreck and eight adult dogs housed in a kennel. They were shot through the grating.

Four pups hiding under their mother in the van survived, as did two other dogs the shooters didn’t see.

These six were taken to the owner’s workshop in Wellsford, but one later died. None of the dogs had been registered.

Pretty despicable stuff, all arising out of a dispute between neighbours over actions taken by the dog.

Almost is frightening is the last paragraph of the story:

SPCA executive director Bob Kerridge said two investigators had visited the property and would determine whether the dogs suffered before they died. A decision would then be made on whether to charge the gunmen. Wilful ill-treatment carries a penalty of up to three years’ jail.

2010 – The International Year of Biodiversity

Last week, British environmental critic and guardian journalist George Monbiot  posted on the newly state-sanctioned ‘pro-active non-selective badger cull‘ in Wales to stop the spread of bovine tuberculosis, despite ample scientific evidence suggesting that this practice actually increases its spread, sardonically reminding us that 2010 is indeed the International Year of Biodiversity. In many ways, it seems funny that 2010 should be the one we choose to be the year of biodiversity, given that there has never been a year in human civilisation with a lower number of species across the planet. In light of this contradiction, I thought now might be a good time to remind ourselves of the link between meat eating and biodiversity. END_OF_DOCUMENT_TOKEN_TO_BE_REPLACED

Guest Post: ‘I Want to Hug You and Squeeze You into Itty-Bitty Pieces!’

Daniel is a 4th year student at the University of Auckland, doing conjoint degrees in Law and English Literature and is currently a student in Animals and the Law.

Warner Bros creation Elmyra Duff of Tiny Toon Adventures is both amusing to watch and interesting to think about as a tool for social critique. Elmyra is modeled as a sort of female version of Elmer Fudd, ‘wabbit’ hunter and arch-enemy of Bugs Bunny. Instead of resorting to obvious forms of violence, as Elmer does, Elmyra chooses rather to love animals, although the net result of animal suffering is probably the same in both cases. Elmyra, however, is far more complicated in her motives and methods. Elmer Fudd hunts rabbits. It is simple and without equivocation. Elmyra, complete with her iconic gerbil skull placed in the middle of her hair ribbon, is a potent symbol for a more ubiquitous form of animal abuse. Elmyra’s abuse is pernicious, owing to the fact that it masquerades as animal love. Elmyra is a pet owner and collector. Elmyra loves pets. We all love pets. But all that love comes at a cost.  END_OF_DOCUMENT_TOKEN_TO_BE_REPLACED

Jessica is a 5th year student at the University of Auckland, completing conjoint degrees in Law and Arts. She is in the transition from vegetarianism to veganism.  She also enjoys sports such as kickboxing and tennis.

A close friend of mine mentioned that she was thinking of buying a bulldog the other day. They’re a good size for the amount of space she has, they make great companions, and they’re adorable. It got me thinking about the bulldog, a long suffering canine plagued by respiratory illness, skin disease, and joint problems (to name a few). How did this happen? If pedigree dog breeding is, as breeders would have it, about breeding away from defects and towards a healthy, ‘perfect’ looking specimen, then how have bulldogs ended up in such dire straits? END_OF_DOCUMENT_TOKEN_TO_BE_REPLACED 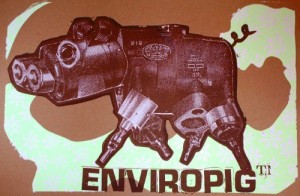 An Open Letter to Your Local Cafe: Cater to Vegans

I’m fed up.  I’m normally very positive when it comes to food, and coffee.  My diet is the (vegan) opposite of James’ porridge-and-apricots hike: Varied, spicy, and (too often) pricey fare.   On the weekend, I often relax by visiting a cafe with a friend or a novel.  When I need to plan my time in a busy patch, an espresso and my diary is the go.

And I think that it is easy to make, and to buy, varied and enjoyable vegan food in Auckland (and in Hamilton, Wellington, and Christchurch, if not elsewhere in New Zealand).  There are a lot of vegan options in cafes and restaurants.  Sure, it’s not New York and it’s not Melbourne (If anyone reading this wants to open a Lord of the Fries franchise in Auckland: I and my friends will keep you in business.  Not joking.), but it’s not bad.

My Upcoming Date with Bob Barker…

Most New Zealanders probably have no idea who Barker is – though you may have seen his cameo in Happy Gilmore, where he beats up Adam Sandler (apologies for the poor video quality) –  but as a  boy growing up in Canada, Bob Barker played a big role in my early life. Back when our television only picked up 3 or 4 channels – in the 70s and 80s – Barker was the host of one of North America’s most famous game shows: The Price is Right.   Barker was an institution, hosting the show for thirty-five years.  My grandmother – like many grandmothers – was a big Price is Right fan, as well as a huge Barker fan, and I have fond memories of watching the show with her as a child.

Of course, that’s hardly the only reason for my being a big Bob Barker fan.  He was perhaps the first prominent celebrity to take up the animal cause, ending every one of his shows with a plea to pet owners to get their pets ‘spayed or neutered’.  But Barker went much further than that.  He put his money where his mouth was, and unlike many celebrities who offer time and energy regarding specific causes, Barker’s focus has been animal law, with him correctly reasoning that we need lawyers who understand how animals are treated by the law in order to move the movement forward.  In addition to numerous other donations to animal related causes, Barker has stimulated the study of animal law in the USA, and inferentially, around the world.  From the ALDF web page: END_OF_DOCUMENT_TOKEN_TO_BE_REPLACED

Jeremy is a fourth year Bachelor of Environmental Science student at Monash University (Australia). He has been vegan for four and a half years and enjoys sport, particularly running and cycling.

With the Copenhagen climate change summit ending with a generally accepted (if unratified) consensus that emissions cuts of at least 20% will be required by 2020 in order to avoid dangerous climate change, governments around the world are looking for ways to transition to a low carbon economy. It is often said that the best way to cushion the initial blow will be to ‘pick the low hanging fruit’ – ending blatantly unsustainable practices, for which there are readily available substitutes. Adopting energy efficiency initiatives, for example, could allow for as much of 29% of the US’s carbon emissions to be mitigated while generating a profit in the process.[1]

It is interesting to note that a measure that could deliver emissions reductions of a similar magnitude and could arguably be simpler to implement has not even been mentioned at the large climate talks and has received scant attention in the literature. This measure is veg*nism.

According to the UNFAO report Livestock’s Long Shadow,[2] animal husbandry contributes 18% of global greenhouse gas emissions. While it would be overly simplistic to suggest that if the world’s population went vegan overnight, the spectre of global warming would creep back into its cupboard, it is nonetheless true that a plant based diet places considerably less stress on the environment. END_OF_DOCUMENT_TOKEN_TO_BE_REPLACED